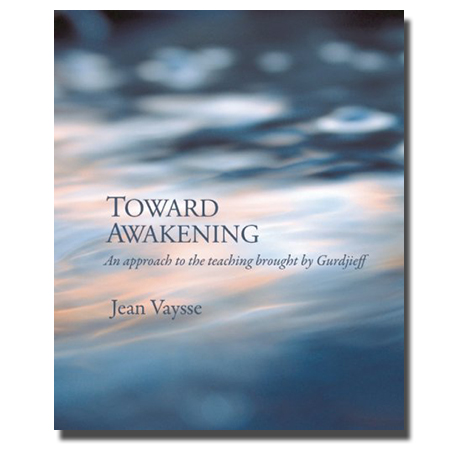 The return-to-print of a classic text is a joyous event for those whose lives were forever changed from having read it.

Twenty-eight years ago, Toward Awakening, was “one of the first accounts to hint at the practical approach to work through giving attention to the sensation of the body, a study of which was central in Gurdjieff’s method.” [Quote is from the dust jacket text; emphasis is mine.]

In 1974, six years prior to reading Vaysse’s book, I was a student at J.G. Bennett’s Sherborne Academy in England, where Bennett, then in his late seventies, attempted to transmit to a hundred-and-one students, mostly in their mid twenties, all that he “made his own” from all that he received from Gurdjieff. For me, twenty-nine at the time, the most powerful action of attention that Mr. Bennett opened us to was the practice of sensing, which he had learned from Gurdjieff in 1948.

Six years of intensive study and sensing practice pass when a copy of Vaysse’s book, first published in English in 1980, comes into my hands: When practice meets up with clear articulation and deep understanding of the source teaching behind the practice, the mind and body of the practitioner harmonize — and my life was changed yet again.

Today, anyone benefiting from the practice of sensing, as well as those just beginning to appreciate the work of attention central to Gurdjieff’s method will find in Toward Awakening much more than hints. Contained therein, in print, are clear indications on how to approach, meet, and awaken to real work inside your body. Guaranteed!